In Spring 1989, my second semester into the landscape architecture graduate (MLA) program at Cal Berkeley, I took the California Landscapes seminar with professors Michael Laurie, Burt Litton, Joe McBride. Burt was the great uncle of the guy I had just broken up with, so I was hesitant about taking the class, but every MLA student I talked to who had taken the class raved about it. This guy hadn’t been super close with his uncle, so I signed up.

This course showed me my niche in landscape architecture. These three men took us out into the field to look at and draw the landscape. I learned how to read the landscape, as historical, regional and ecological text, and to see these perspectives as intertwined. They turned me on to J. B. Jackson. And we recorded our observations through watercolor/pencil field sketches, a favorite media for me. They taught us how to make notes, how to treat the field notebook as a tool for understanding place. And together, they were very funny. I loved watching Michael Laurie, the most city-adapted of the three, prepare his environment when he was called upon to sit on the ground. I could tell that drawing from just the right spot demanded great sacrifice for him. Later, when I was schooled on the creature comforts that 18th century English landscape readers enjoyed–soft velvet field stools, an assistant to carry the paints and brushes–I thought Professor Laurie was perhaps born a bit late. But he roughed it on the ground in moderately good humor. Professor Joe McBride was more of a John Muir type. He could no doubt do fine in the wilderness with nothing but a tea bag, bed roll and a few dry crackers, as long as he could be among his beloved trees. And professor Litton fell somewhere in between, a little of John Wayne sipping whiskey by the campfire, a bit of William Kent sketching beautiful images on his long trips across the more cultured landscapes of 18th-Century Europe.

Two years later, my eventually-to-be-husband and I became two of few students who ever got to go adventuring twice with the three amigos. Because the class was extremely popular, no repeats were allowed. But we both drove trucks. By agreeing to haul the gear down South, we enjoyed a journey through the California desert country. This trip deepened our mutual love of desert landscapes, so I have Laurie, Litton and McBride to thank for the family that transpired, and for our careers teaching in the desert southwest. Sadly, Michael Laurie and Burt Litton passed away in 2002 and 2007. Professor McBride is an emeritus professor at Berkeley and continues to speak for the trees.

I would love to share more sketches from anyone who took these great seminars. Send me a note and an image, and I can share them in the Daybook Series. rebecca [at] rebeccafishewan [dot] com

In honor of one of my favorite numbers, I’m skipping ahead in the daybooks, past my musings on Ginsberg’s poem “Howl” and my cartoon augmented scribing of Ferlinghetti’s “Pictures of the Gone World,” to the next landscape design project, a park between Lake Merritt and the freeway in Oakland. Originally designed by nature as salt marshland (unless you hark way back when the ice age had dropped sea level and this spot of land was probably oak speckled grassland, but you’d have to believe in climate change to do that), the site had experienced a number of changes over time, including conversion into a plop art park by Garrett Eckbo. The morning I walked through the park with Chip Sullivan’s design class, I didn’t know Garrett Eckbo was an uber famous landscape architect whom I would someday teach about in a landscape history course in Arizona.

That’s the thing about time. Even if you know it’s passing, you can never tell where it’s going. The future me was going to be a college professor in the desert. The present me wore leg-warmers that morning, because the air was full of cold fog and it was 1988 (who didn’t love Jennifer Beals in Flash Dance?). And the past me?

Before starting design school, I taught high school math. I spent my days waxing on about the wonders of numbers like Pi to a classroom full of fascinated teens. They were fascinated in one another, but at least they were excited. Anyhow, Pi’s irrationality is one of its charms. Another is its connection to circles. As a high school calculus student, I had written a treatise on circles (pretty sure this is a math nerd indicator). As a teen, I was fascinated by other teens, mostly my dreamy boyfriend who turned out to be a jerk, but I had some room in my thrill chamber (a math nerd means her head when using this term) for mathematical things that looked finite, but weren’t, like circles, line segments, and irrational numbers. My favorite lines of poetry as a teen were from William Blake’s “The Augeries of Innocence”:

To see a World in a Grain of Sand

And a Heaven in a Wild Flower,

Hold Infinity in the palm of your hand

And Eternity in an hour.

Time and space have this same bounded yet expansive quality. If you walk into a park you’ve never been to, you carry in your mind and body all the memories of other parks, and these memories color the way you experience this new environment, so you are in the past somewhere else and the present where you stand simultaneously.

For reading, Chip assigned Jorge Luis Borges’s short story “The Garden of the Forking Paths,” which I devoured. At the time, I had no idea it would inform my four book time travel/multiverse novels featuring love and pie. Back then, Borges’s story just made me think of fractals and how time can fold in on itself, like that park experience. So I tried to design a fractal park that pulled up the layered history of the landscape. Easy as pie.

This page was thoughts I had while biking, which is what I used to do when my brain got stuck in studio. I’d hop on my bike and head for the hills. The diagram is a thumbnail of the park. I tried to stuff all my math love into this one little patch of land, fractals, Tau, Pi. It was a frat party of mathiness.

A thought while biking

I’d like to dedicate this post to my Great-Grandfather, John Littlewood, for having a long affair with my Great-Grandmother and passing his awesome math genes on to my Grandpa. And to my favorite math teacher of all time, Jim Kelly at Maybeck High School. These two men, one through DNA and the other through excellent teaching expanded my sense of the infinite universe.

Happy Ultimate Pi Day. See you next time it comes around. I’ll be star dust, but I’ll give you a twinkle 🙂

In design school, specifically landscape architecture at Cal in 1988, students need to draw all the time, to use the daybook to record thoughts, sketch design concepts, draw benches and other LA elements that catch our eye, take notes in class, until the daybook becomes an extension of the mind. The first thirty pages of my design school daybook contain my musings about time, the central theme of the first project: to design a garden for a client obsessed with time and with a extensive clock collection he wants placed in the garden. Most of my pages looked like this: What I see now that I didn’t see then, is that, for me, it all comes down to language. I love words.

I threw in every thought I could conjure about time. Eventually, I will figure out that design, like writing, is about editing.

My first bit of design wisdom came on page 37 (below left), after the sketch of a nude pregnant woman as big as a hillside (a recurring theme in my daybooks: nude women who are also landscapes) and a sketch of my then boyfriend thinking about two peanuts (recurring theme in college: attraction to men with small thoughts). I also used my daybook as a cheap therapist on whom I would dump my frustrations with the design process (below right) and anything else that got my goat. The borrowed landscape is a great landscape architecture concept, because it connects a site to its surroundings. It makes sense that it was one of the first lessons I made note of, along with the J. B. Jacksonesque advice that buildings make good ruins. Fog, sunlight, erosion, really any natural processes, are also huge in landscape architecture, which is what makes it a rich discipline and dynamic practice. Even if the design process can, at times, feel too programmed, the work changes over time and apparently it all returns to coffee stains. Huh.

While I’ve kept a journal of sorts on and off since I was a kid,it wasn’t until I started graduate school in landscape architecture at U.C. Berkeley that it became my constant companion. So I’ve decided to start these weekly sketchbook shares by working through my design education. I won’t post every page, since that would be long and boring. I’ll just find the gems, all the smart things people said at Cal that I noted and the smart ass things I thought of on my own. I didn’t have much money back then, so I used what I had on hand, which was an 8.5 x 11 blank book with a dull red cover. I markered up the front to make it look more artsy, since I could tell grad school in design demanded artsy. When you open up that book, this is what greets you on page one: 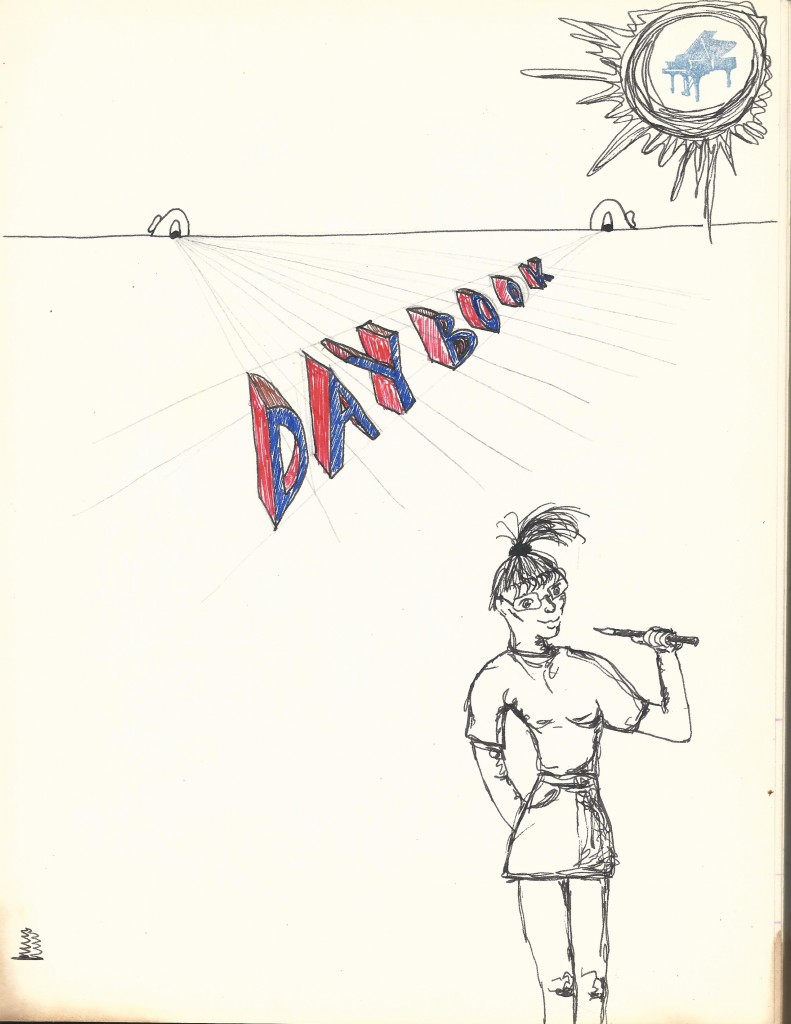 Page one of my first grad school daybook, 1988

note: I’m actually right-handed and not that buff, then, now, or ever.